To learn more about what we accomplished together over the past year, we invite you to review our 2021 – 2022 Annual Report. Inside, you’ll find a snapshot of our impact over the past year, and meet some of the folks who make this community so vibrant – our brave students, dedicated tutors, and generous donors.

Since we first opened our doors over 40 years ago, LVGH has helped over 15,000 adults from across Greater Hartford to improve their English literacy skills.  Check out the timeline to see how we've grown!

Birth of an Agency 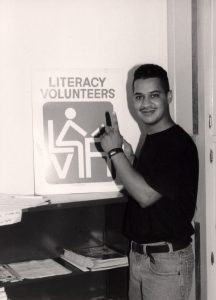 LVGH hits a national record for number of volunteers serving 100 hours or more. From the very beginning, our tutor retention rate has always been above the national average. 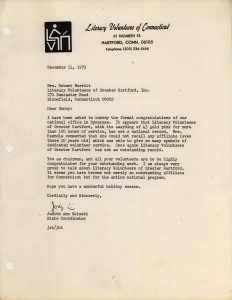 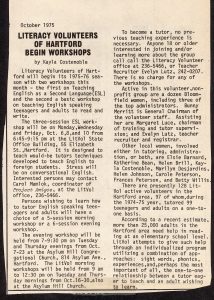 Responding to a critical need in the Hartford community for people from other countries to learn to speak, read, and write English, LVGH adds English as a Second Language tutoring to its programming.

A Time of Growth and Change, Searching for a Home Base

Throughout the ‘80s, LVGH expanded throughout the Hartford community, hired its first paid staff, transitioned from one-on-one to small group tutoring, and opened its first computer lab. Adjusting to these changes, LVGH moved around to several different homes during this time, including Asylum Hill Congregational Church, Moylan School, SAND, 110 Washington Street, the YWCA, and St. John’s Church. LVGH couldn’t have grown into what it is today without the early collaboration of these other organizations.

“It’s opening up a new life for me, something I kept hid for a long time. I feel very confident now that I can pick up a book and read it and know what it is saying.” 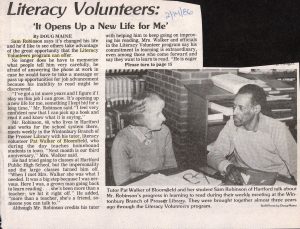 Engaging Students and the Community

The ‘90s were a time of in-depth student and community involvement. LVGH operated multiple program sites at libraries, schools, and community centers throughout Greater Hartford, in addition to the work at our Hartford Center. Greater efforts were made to recruit tutors from the neighborhoods being served. Students were active in literacy awareness campaigns and organized several fundraising events throughout these years.

After several location changes over the years, LVGH moves to 30 Arbor Street, finally establishing a permanent home base in which to grow and thrive.

The first decade of the new century found LVGH in a strong, stable place – the perfect time to reflect on the past and strategize for the future. After years of operating as many as 12 community sites at a time, LVGH streamlined operations to just three community sites in Hartford, Bloomfield, and East Hartford. This resulted in improved coordination and evaluation of services, a greater variety of programming, and a strengthened sense of community.

After 13 years of service to the agency, Susan Roman retires from LVGH.  CJ Hauss is appointed as the new Executive Director.

LVGH partners with the Wickham Library in East Hartford to open a satellite Reading Center there, expanding our service region to include not only East Hartford but also the surrounding towns of Bolton, Ellington, Glastonbury, Manchester, South Windsor, Tolland, Rockville, and Vernon. LVGH grows to serve nearly 600 students per year.

2012 and Beyond: Leaders in Our Community

In 2012, LVGH celebrated 40 years of serving Greater Hartford, and is now recognized as the premier community-based literacy organization in the region.  While we’ve come a long way since 1972, adult literacy remains a major issue of concern for our community. We continue to grow; for the first time ever, we served over 700 students in 2011-2012.  As we look to the future, LVGH is poised to fully realize its developing role as a leader of adult education in the region, and we continue to explore ways to build our capacity so that we can reach more adults in our community.

Get a step ahead in your career with LVGH's free food service job training program. Apply today at: lvgh.org/student-application ... See MoreSee Less

Thank you so much to everyone who participated in the 2022 LVGH Holiday Auction! These funds will go directly towards our literacy and job training programs and will have a huge impact on the students we serve every day. ... See MoreSee Less